I don’t go nuts buying t-shirts and hats at concerts because they’re usually pricey as hell, but when the band puts on a smokin’ show I sometimes break down and score myself a souvenir.

If I recall correctly, Jethro Tull was pretty smokin’ at the Orpheum Theatre in Vancouver on December 10, 1991, which is why I scored myself a black Tull hat before I headed backstage after the gig with my good rockin’ buddy Terry “Terr Bear” Cave, the happy guy in the middle.

Hey, how was I supposed to know Ian Anderson was gonna show up with headgear just like mine?

I do know that he signed my vinyl copy of Jethro Tull Live: Bursting Out. 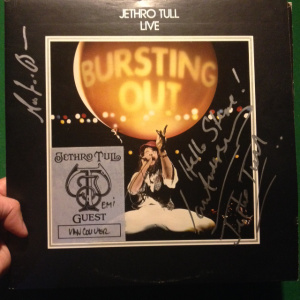 And just as importantly, so did Martin Barre!